Jon Kretchman is known as a Warrior of the North. A legendary barefooter who once cut a path in the ice of the Otter Tail River in West-Central Minnesota so he could train.

He has now carved out his place in the USA Water Ski Hall of Fame. 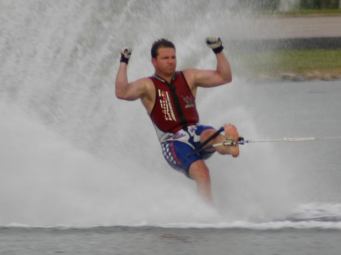 Dozens of the barefooters from around the country and the world gathered at Water Ski Hall of Fame Induction Ceremony at Disney World’s Grand Fantasia Ballroom at the Contemporary Resort this past weekend to celebrate the accomplishments of Kretchman.

Willie Farrell, Ron Scarpa, Keith St. Onge, Lorraine Piskura, Jennifer Calleri, Joe Erickson, Peter Fleck, Don Thompson, Niki Soubliere-Brzoza and Bill Brzoza were just some of the barefoot superstars in attendance.  Plus, the entire #KretchKrew from the Upper Midwest came out in force to support one of the nicest barefooters of all time!

The USA Water Ski Hall of Fame Award of Distinction recognizes individuals who have made a significant contribution as tournament skiers, innovators, industry leaders, officials and others responsible for landmark achievements in the development of water skiing.

In 1991, just four years after competing in his first national championships, Kretchman shattered the World Jump Record, held by Seipel, by an astonishing 11 feet.  He was one of only a few in the world to land an inverted style jump.  Kretchman exceeded the World Jump Record seven more times and is credited with refining the modern barefoot jump style that is still used by current champions today.

Kretchman is the only barefooter to ever complete a 360 turn off the ramp, score a wake to wake 360 in a tournament and was the first to complete feet-to-feet toe turns in a tournament.  Kretchman was a member of five World Champion U.S. Barefoot teams and coached three World Champion U.S. Barefoot teams.  He is the only barefooter to have skied and coached on gold medal winning US Teams.

He is a four-time National Jump Champion, and a two-time U.S. Open Jump Champion. Before retiring in 2000, Kretchman received 11 consecutive Midwest Region and Minnesota State overall titles, won the 1998 X-Format Jump, received silver at the 1996 ESPN X-Games Barefoot Jumping and was also the recipient of the 2000 Banana George “Barefooter of the Year.”

Kretchman has given back to the sport as a world-renowned coach, driver, Judge and Scorer.

The American Barefoot Club is so proud of Jon Kretchman! He now he takes his rightful place in our sport’s history! Congrats Jon! We are all members of the #KretchKrew today!