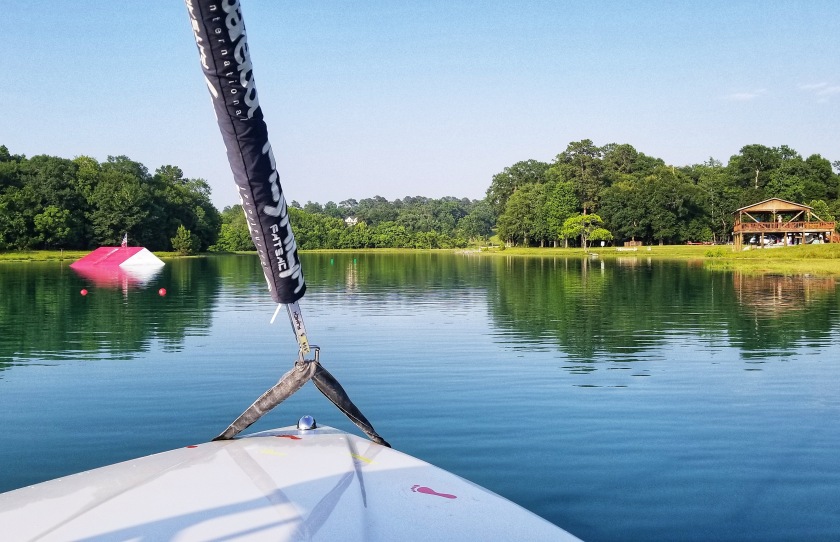 As our truck and camper pulled past the chicken coop and onto the dirt road leading away from Stevenson Ski Ranch, I glanced in the rear view mirror to find all the necessary ingredients to a truly epic weekend: two decked out Sanger DXII’s, a motor home, truckloads of sunburned Footers, 10 recently emptied gas cans, and a 2400 foot long slab of buttermilk chicken.

This weekend was a success, and if you ask any of the 22 skiers who signed up (some all the way from Florida, Missouri, and Colorado) they’ll tell you they are already planning on coming back next year.

The 2018 Barefoot Blowout was held on a private piece of property in the unassuming town of Conroe, Texas, about 45 minutes from Houston. There the Stevenson family has built a destination ski lake, perfectly positioned to stay glassy in even the worst weather conditions. While skiing, horses stand in the shallows to drink and cows graze along the bank, while grassy shorelines absorb rollers so fast you quickly forget rollback exists. The site is so perfect for water-skiing that there are already plans to have the Collegiate Water-skiing Nationals there in 2020 and (tentatively) the Barefoot Water-skiing nationals in 2021.

We had 22 skiers sign up, all of whom had the opportunity to ski three rounds of tricks and three rounds of Slalom. The boat crews battled 103 air temperature and a cloudless sky to keep PB’s flowing from 8AM to 7PM. In the Women’s B division both Ali Gates and Teri Davison competed in their first ever tournament. Teri learned how to ski longline just one week before the tournament, and Ali skied longline for the first time the day before the tournament (she ended up with four wake crosses in the 2nd round in one run!). Will Stevenson was given quick instructions on the dock, and got up longline for his first time during the competition. All 3 of these skiers earned their Barefooter patches and plan on coming to Regionals!

In the Men’s C division, Slalom has never been so competitive, with 1st place and 4th place scoring within .1 crosses of each other. Brett Swanbom, Chris Mcwatters, Lauren Ehlers, VonL Adams, Austin Kolodejcak, and Sammi Eaton all PB’d in tricks, while Mark Shank, VonL, and Austin PB’d in Slalom.

After the tournament was over and everybody had skied to their hearts content, we had two muggles come forward and ask to learn how to Barefoot. Both men got up on their feet on their first try and skied down the lake. The day after the tournament, we had a mini surface turns clinic. Brett Swanbom, Austin Kolodejcak, and Lauren Ehlers all did their first ever surface turns on their feet to the awe of the crowd.

Overall, nobody could have asked for a better weekend. Laughter, sun, and barefooting combined to make an event that won’t soon be forgotten and will need to be repeated. Huge thanks to the Austin Barefoot Ski Club for putting on the tournament.

We hope to see everyone this July for our South Central Regionals at the Blue Mile on July 14th! Together we are making barefooting great again!

Thanks and Gig ‘Em,