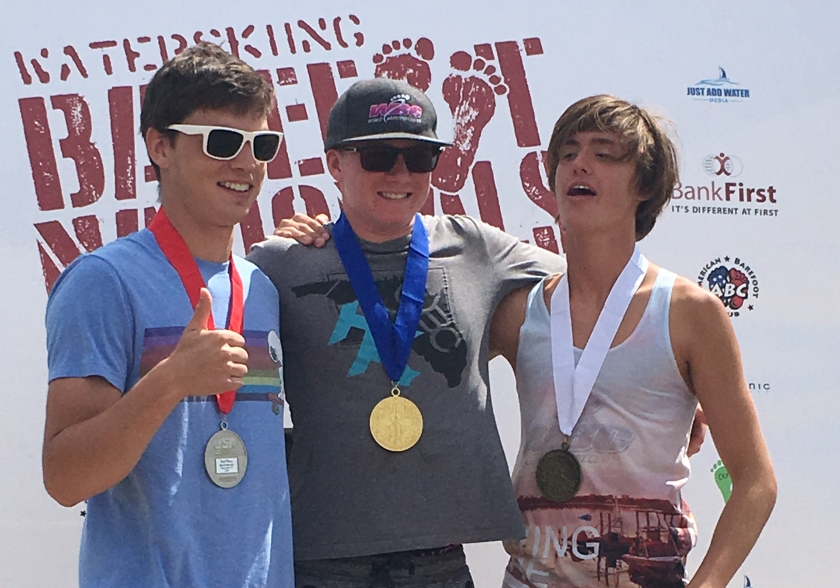 The 2019 U.S. Barefoot Nationals are in the books after a final day dominated by the young phenoms of our sport… from South Dakota’s 9-year-old Amara Bruns competing in her first Nationals to Florida’s 16-year-old Jackson Gerard claiming his first National Overall Title after just missing the title by four points in 2018.

In the Open Pro Mens Division, Jackson Gerard won tricks with 11,600 points, slalom with an 18.8, jump with a 23.5 meter jump and the Overall title.  While he was winning all of these titles, he also spent most of the day driving the pick up boat for other events.

“It doesn’t matter if he one of the best in the world… he still pitches in to make every tournament success.  We just love that young man,” says Chief Judge Andrea Formella.

In the Open Womens division, Lexi McCauley started the day with a trick run she made up as she went along… scoring 5800 points and a confirmed Open Womens National Record!  Lexi eclipsed the old record by nearly twice!  Lexi went on to win slalom with 14.5 and the Overall Title.  Alex Youngblood won Open Womens jump with a 10.5 meter jump and finished second overall. Ryleigh Stenson was third in tricks! Teri Jones finished third in Slalom.

The Open Women Tricks Medal Ceremony was also a time to recognize the Dads who competed with and got beat by their daughters at the U.S. Nationals. Jim Youngblood joined Alex,  Mark McCauley, who was also the 2019 Mens A Overall Champion, joined Lexi and Rick Stenson joined Ryleigh on the medal stand. We love our barefoot families! 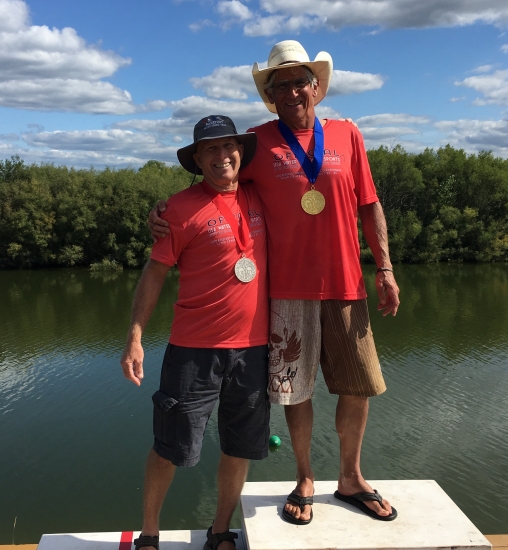 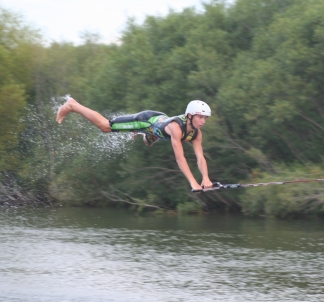 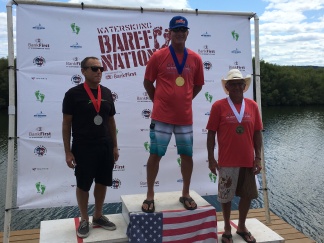 The Open Mens division was filled with several generations of barefooters.  The Legend, Doug Jordan, won jump with a 13.6 meter leap, Jim Forster won Slalom with a 14.4 and “Flipping” Jerry Kanawyer won tricks with 4400 points and the Overall title.  But 13-year-old Brett Swanbom,who was competing for the first time in Open Mens, made quite a statement, finishing second in tricks, and third overall.

In the International Womens division, Australia’s Ash Stebbeings finished first in tricks with 9410 points, first in slalom with a 17.8 and first in jump with a 20.5 meter launch.  Fellow Australian Kelly Blank finished in second and sent a pending Australian National Record.

New Zealand’s Will Leigh, captured all of the International Mens titles and also won the title of the nicest Kiwi in the tournament.

The most exciting events of the tournament were the Boys and Girls divisions where so many new, young faces were on the dock.  It was one of the largest showings of junior skiers in many years.

In the Girls B division, 9-year-old Amara Bruns won Tricks, Slalom and Overall… all while talking, smiling and qualifying for the 2020 World Barefoot Championships.

In Boys B, The Minnesota Twins of Orval and Martin Cyr dominated… finishing first and second respectively in tricks, slalom, jump and the overall.  Carter Boerman was right on their heels in his very first National Tournament!

In the large Boys A Division, the competition and the sportsmanship was incredible. Ellis Osborn won Tricks, Jump and the Overall title. Michael Sousa won slalom… but Cole Stellmacher, Dawson Wallen, James Bruns and Kevin Garrity really gave Ellis and Michael a run for their money!

For the first time, Nationals had a Regional Team Competition. The Chief Judge gave points for placement and participation!  The Midwest won top honors followed by The South and The East.  The Midwest awarded their trophy to the Heller Family, our incredible hosts at the Blue Moo.

Massive thanks go out to Tournament Directors Andrew Martin, Shannon Klahn and Mike Molepske.  Thanks also to the Adams Family, Joe Knapp, Dan Baumgartner, and Brent Payne for supplying the tournament boats and all of the help!

Thanks to Deanna Dean and the World Barefoot Center for organizing the livestream coverage!  WOW!!!!!

And we all missed Super Veteran Jim Boyette who has never missed a national competition until now.  Poor health kept him home in Florida.

Now, Joe Knapp holds the title of only barefooter to compete in all three events in every single barefoot nationals… yup, 42 tournaments in row!

We will see you next year in Polk County, Florida for the 2020 U.S. Barefoot Nationals August 13-16!  Until then, support your local tournaments!

We are one week away from the @donmixonjr Hall of Fame Barefoot Tourney!!! Sign up in the new @iwwfed EMS and join us at fabulous Lake Grew in beautiful Polk City, Florida!!! And this is the back of the t-shirt!!!!! Contact @bengroen or @betsybarefoots #barefootnation👣 #wearewaterski #donjrrocks