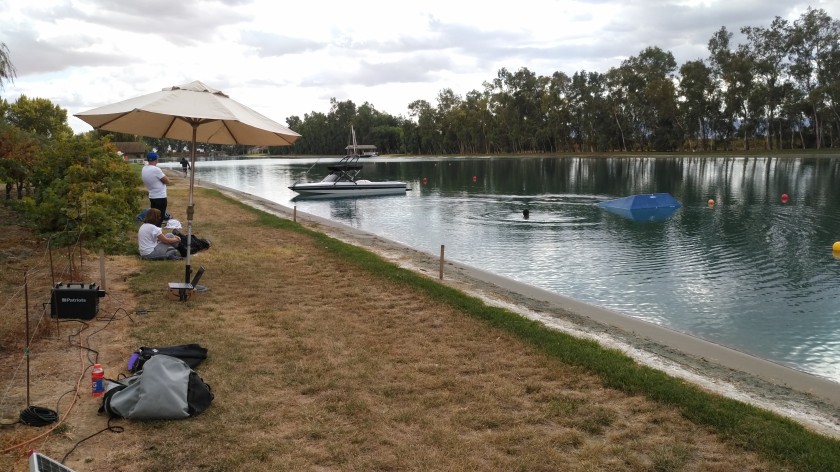 It was a chilly morning for the native Californians, but at the Diablo Shores Barefoot Bash fun was had by all!  And the 12 skiers had plenty of opportunities to ski during the two rounds for each event.

Ted and Vicki Klein joined in on their third competition of the season, with Vicki making her back deep and flying tumble up.  Doug Jordan also joined from Washington, and Joe Lovato impressed with his signature “froggy” start.

Host Jerry Kanawyer not only put on an excellent event, he also qualified for the 2020 Worlds in the Slalom competition!  Eric Coryer from Georgia will be able to join Jerry in Australia, qualifying for the jump event himself during the second round.  And finishing out the Worlds qualifiers was Danny Bray, jumping an impressive first tournament jump in over a decade and landing an inverted leap!

Willie Farrell wowed the crowd as always with his beautiful surface turns.  And Mikey Caruso, joining from Florida, had some “local” fans in his aunt and uncle from San Jose stopping by to see their nephew compete.  Another local skier, Andrew Martin, skied a PB 14.2 in slalom, and proved he could jump further than a sack of potatoes at 9.4 meters.

Andrea Formella, a recent transplant to the Bay Area, skiied her second tournament of the year and judged the majority of the tricks and jump events.  She also brought along a neighbor and newcomer to the Boom division, Peter DiPrete, to compete in his first event!

Several spectators visited throughout the day, mainly friends and family members from around the Bay Area.  And as with other barefoot events the competitors wowed and the day was enjoyed by all.  The conditions on the lake were stellar even with a stiff breeze blowing, and footage of trick runs, shot by Mark Duewel, were enjoyed on the big screen over dinner in the evening.

Support the US Barefoot Team!