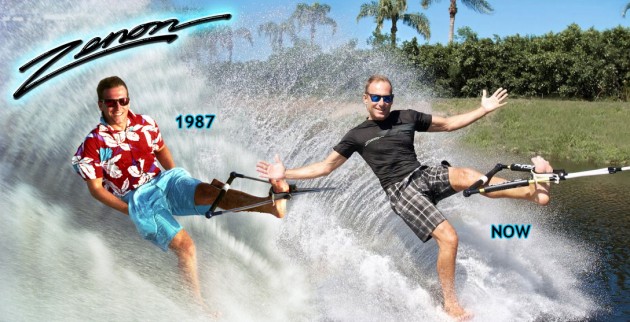 Professional skier Zenon Bilas started water skiing in 1975 and never looked back—but can he still hang with the pros, at 53?

Unlike a lot of watersports athletes, Zenon Bilas crossed over from specializing in barefoot skiing into other disciplines such as slalom and trick skiing competitions. In his coaching work, Bilas has worked with skiers of all stripes, including working with wakeboarders. The net result, he says, is a broad spectrum of knowledge of all water skiing disciplines, which has helped propel him to the forefront of the sport and across the globe—for over 30 years.

“Typically people will stick to the their segment, and even though barefooting has always been my thing, I’ve moved around and tried to cross over,” Bilas says.

He got his start at age 20 in 1982 when he moved from Illinois to Florida, to start the first year-round barefoot skiing school with Mike Seipel. Naysayers were everywhere, and the first two years were rough. But by the third year, Seipel’s school was doing well. Even members of the Kennedy family had come from their compound in Palm Beach to learn barefooting. After four years, Bilas left to establish his own career.

“He gave me a shot at being an entrepreneur at 20,” Bilas says. “I didn’t make a lot of money, but I learned a ton and I don’t know how often people get an opportunity like that, to learn and push yourself.”

He’s been pushing himself ever since. Bilas went on to become a seven-time barefoot national champion, and now at age 53, he’s making a comeback. He’ll be skiing competitively again at regional tournaments and at the nationals in Wisconsin. If you think that’s a tall order for a guy north of 50 years old, consider that all of the top 10 athletes in the USA WaterSki Men’s Masters rankings are over age 40. Bilas worked hard to get back in “fighting trim” and he’s as focused as ever.

If you don’t know how a barefoot ski tournament works, here’s the gist of it. There are three events: slalom, trick and jump. In the slalom portion, the skier crosses the wake as many times as he or she can in 15 seconds. The skier makes two passes, one facing forward and one facing rearward. Points are awarded accordingly. For the trick portion, the skier also gets two 15-second passes to do as many tricks as possible. Each trick has a point value. Then, for the jump portion, it’s a simple matter of distance.

In addition to skiing competitively, Bilas does coaching and writes about the sport for various publications throughout the world. He’s conducted clinics and ski shows in China six times and held another in Beirut, Lebanon. He’s also pursuing more work in advertising and commercials. If you remember the Kellogg’s Frosted Flakes commercial in which Tony the Tiger was barefooting, it was Bilas doing the skiing—not Tony.

Having spent more than 30 years at the forefront of the sport, Bilas has a good perspective on developments that changed it. In terms of equipment, new materials have revolutionized the industry. Top-shelf slalom skis are now made using more advanced techniques and carbon fiber. They’re lighter and more resistant to flex. Towers that emerged when wakeboarding took off are also great for barefooting, because they pull from a higher point. Speed control systems have made for a more consistent pull. Even little things, such as the lines and ropes used for pulling skiers and wakeboarders, are better according to Bilas.

“The lines we use are better for each event because every event needs a different kind of line,” he says. “For slalom skiing, you want a little spring, but not too much. Barefooting is a tighter line, so there are some nuances.”

As for the boats that tow the sport, well, advances in engine performance mark the biggest leap forward. A 350-cubic-inch Chevrolet V8 that used to make 230 horsepower now makes 350 without a hint of strain. A stronger engine helps the skier get up on top of the water quicker and doesn’t get bogged down when a skier cuts hard around a buoy, which keeps the boat pointed straight ahead and provides a more exact pull.

Where Bilas is concerned, it’s now possible to get good instruction to learn how to ski barefoot. When he was first taking up the sport, there was nowhere to turn. “Now you can get equipment. Now you can get lessons,” Bilas says. “In the 1970s, that didn’t exist. So, today, if you want to learn to barefoot, you can learn. You can get a coach. You can learn with shoe skis. You can learn in a very methodical way.”

In looking at his career so far, Bilas expresses a gratitude to the sport that has given him so much. To paraphrase an old Saturday Night Live sketch, water skiing has been very, very good to Bilas.

This guy... Lenny T... will be at the #millspondmarchmadness barefoot tourney in Fort Lauderdale on March 7! Will you be there? Check out Lenny’s video link in our bio! #barefootnation👣 #lifeonthewater #growingbolder