Danny Bray is a barefooter who had not competed in a tournament in decades. That’s until Saturday when he slayed his toe-up and did a flawless back-to-front in the California State Tournament in Central California at a lake known as “Randyland.” 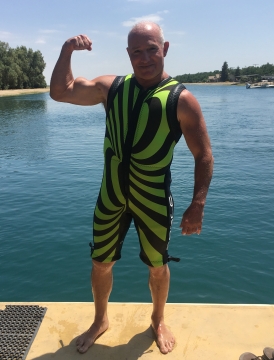 Danny barefoots with his friend Randy Paquette in the man-made lake near Bakersfield and a few months ago they decided it was time to bring a barefooting tournament back to the San Joaquin Valley.

There has not been a barefoot tournament in California since the 2013 U.S. Barefoot Nationals.  With Danny’s Dream, Randy’s Lake and ABC Western Regional Director Jerry Kanawyer’s boat, barefooting is officially back in the Golden State!

Fourteen Footers from California, Washington, Oregon, Montana, Arizona, Florida, Georgia and Canada took to the glass calm waters of RandyLand (after some repairs on Jerry’s Boat) to chalk up some Personal Bests scores and a few World Championship Qualifying Scores.

Lake owner and Veteran Mens Competitor Randy dominated his division AND earned his ABC Barefooter Badge.  The badge was quickly sewn on his favorite hat before the tournament ended.

In Open Pro, Willie Farrell set the bar high with a 17.4 in slalom and a 4560 in tricks… both qualifying scores for the Senior Worlds. He also managed to get thrown out of the boat by Brian Heeney who along with Joe Lovato did much of the boat judging. But even more impressive, Willie earned his ABC Barefooter and Master Barefooter Badge.

Chris “Open Pro” McWatters scored a 17 in slalom all while serving as a Driver and Chief Safety Director for the tournament.

The Canadian Barefoot Superstar Gordie Croteau was back on the water after recovering from a dislocated shoulder he suffered at the 2016 World Championships in August. He scored a 16.8 in slalom and 3200 in tricks.

Jerry Kanawyer, Doug Jordan, Joe Lovato and Brian Heeney battled it out in Open Mens. Doug pulled out a new trick run in every round and Joe did his Frog back deep start (400 points) with incredible accuracy. Doug did much of the boat driving, Joe and Brian did the lions share of the boat judging and Jerry did all of the scoring!

In the Womens B Division, Lynae Newby found that very little time on the water was a good training plan. She doubled her PB in tricks to 430 and scored a 4.0 in slalom with some solid crossings and fierce back deeps.

Andrew Martin of the Mens A Division drove all night from San Francisco to compete at Randyland… scoring 13 in slalom and 2000 in tricks. 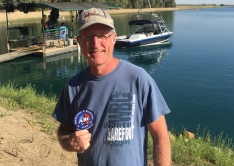 In Mens C, the Arizona footers dominated. Scott Sanborn scored a 12.2 in slalom… moving into the Mens A Division.  Andy Gould scored a 2.48 in slalom, 370 in tricks and earned his ABC Barefooter Badge.

Huge thanks go out to Randy and Patti Paquette for opening their lake, their home and even their refrigerator to the #barefootnation.  They grilled a fantastic supper on the lake for the whole crew that included Claudia Bray’s kicking homemade salsa!

And big round of applause for Danny Bray who never lost his talent or his love of barefooting and is already making plans for the next Randyland Barefoot Tournament!

Click here for all of the California State Tournament scores!