Mike Molepske spent Friday keeping his cool… right before his tournament.  More than six inches of rain had fallen in three days leaving his beloved river, ski spot and tournament location flooded and full of floating branches and trees.

When feet are your skis… that is no good.

Mike warned competitors of his 10th Annual Cooler by the Lake Tournament that his barefoot tournament may become a shoe ski tournament.

But Saturday morning dawned, cold, calm and clear of logs… and the tournament was on!

The first skier hit the water at 6:30am and then… well, barefooters kicked butt! With a special guest appearance in the boat from Mary Molepske… the water stayed fairly nice through the morning.

The Legendary Joe Knapp from Minnesota dominated the Master Men division with a 1050 in tricks and an 8.3 in slalom.

The Pride of Ohio, Tina and Mark McCauley made the trip to the shore of Lake Michigan to also chalk up some great scores. Tina scored 520 in tricks before a wetsuit malfunction left her on the dock for slalom.  Mark scored 1720 in tricks and a clean 11.2 in slalom. 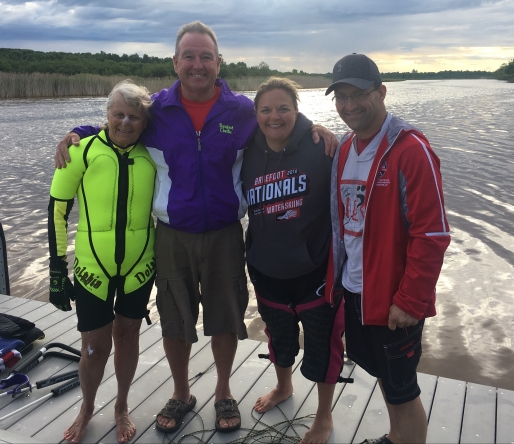 Wisconsin’s own Chuck Bender slalomed a personal best of 5.88 and 310 in tricks.

Sammi Eaton scored a 570 in tricks and a 4.83 in slalom. Qualifying for the 2018 Junior World Championships. Sammi also earned her ABC Barefooter Badge!

Dan Baumgartner and Brody Meskers represented for the pros, while the Men A & B Division saw Scott Stouffer, Scott “Yes I can do toe turns and a tumble up back deep” Hodek, Mike Molepske, Mike Shoenke, Eric Friedle and Mark McCauley make some great runs.

Shannon Heller Klahn kicked up a 12 and a 12.4 in slalom.  Shannon also ran the pick-up jetski and video in the boat.

Ben Hough and Sharon Carlson made it happen for the Veteran Mens and Women Division. Ben scored 2.1 in slalom and 210 in tricks. Sharon scored 1.9 in slalom and 650 in tricks. Glenn Knight also scored well in Senior Mens with a 290 in tricks and a 4.5 in tricks.

At lunch, the tournament stopped and Amy Molepske served up a fabulous gourmet meal in the boat shrine.  And then it was the bonus round with Brody Meskers slaloming up a storm… literally.  The wind started blowing.

Eric is “all in” again because he also participated in the ABC Scorers Clinic with Jen Blake, Tina McCauley and Sharon Carlson!

Huge thanks to the Molepske Family for hosting another great Cooler by the Lake and donating all of their proceeds to the American Barefoot Club! For all the scores click here.