June 23, 2017 BetsyAG Footer of the Month, Uncategorized Leave a comment

Mike Molepske likes to keep it Cool… Cooler By the Lake. This Saturday, June 24th, marks the 10th annual Cooler by the Lake Tournament in Two Rivers, Wisconsin. This is Mike’s tournament in which he usually does it all, skis, judges, homologates, scores… everything!

Not only is Mike an amazing barefoot water skier but there is no one as generous with his time and money in our sport.  For this reason and many others… Mike is June’s Featured Footer of the Month.

Mike Molepske was introduced to barefoot waterski tournaments in 1998 by Terry Schuler, a close family friend. The moment he started competing, he fell in love with the sport and the people who participate in it. A dedicated, thoughtful person and a loyal friend, Mike constantly strives to improve the sport of barefooting and works diligently with both competitors and officials to ensure they are successful on and off the water. 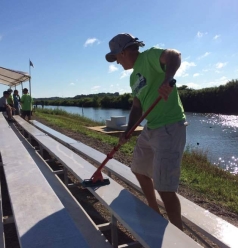 Mike’s involvement in barefoot tournaments is not limited to skiing. From 1998 to 2001, Mike volunteered in numerous capacities, including dock starter and videographer at local tournaments. In 2002, he became an event judge and worked hard to garner a solid understanding of the sport and increase his ratings. Today, Mike is a Level 1 judge; he was an event Judge at the 2012 and 2014 World Championships in Germany and Australia and most recently served as Assistant Chief Judge at the 2016 World Championships in Alma Center, Wisconsin.

Focused on contributing to the development of the sport, Mike became a member of the American Barefoot Club (ABC) Board of Directors in 2005 and is currently the ABC Vice President. He currently serves as Chair of both the ABC and WBC Officials committees, working as a liaison between both organizations to ensure officials are being recognized and developed in a consistent manner. He is also a member of the WBC Rule Committee, where he has been working to encourage more input from officials and skiers to make the rulebook more user-friendly.

A strong commitment to family, Mike is proud to have introduced his daughters to barefoot waterskiing. Both daughters actively volunteer at tournaments throughout the year, following the wonderful example Mike has set. Mike and his youngest daughter, Sarah have attended every nationals together over the past ten years and will continue this tradition for years to come.

Mike is also committed to his extended barefooting family. In 2007, Mike started hosting an annual barefoot tournament at his home site called “Cooler by the Lake”. This is a family-oriented tournament focused on having fun and introducing new skiers to the sport in a welcoming environment. Mike’s wife, Amy prepares a delicious home-cooked lunch for everyone, and they stop the tournament for all to enjoy together. All proceeds from the tournament are donated to the American Barefoot Club.

Mike’s dedication to barefooting is to be honored and admired. We are proud to have him in our sport!