Four barefooters received special honors at the U.S. Barefoot Nationals!  The Jennifer Renee Odom Spirit Award went to Megan Adams and Lexi McCauley,  the Banana George Barefooter of the Year went to Mark Shank and the Stew McDonald Longtime Service Award went to Doug Jordan.  You can find past winners and full award descriptions here. The winning nominations are listed below:

This girl has it going on! Megan Adams is unbelievably helpful! We are blessed to have Megan so involved in this sport at such a young age.  Each year you will find her helping out with various tasks. It is quite possible she has been in the boat videoing while you skied/judged or maybe she has sold you some clothing while working the booth at a tournament. That’s just off the water! On the water Megan is killing it and just recently qualified to ski the World Championships! Get it girl!

Even though this young skier is quickly climbing the ranks and already stepping into the record books, they continue to stay humble and helpful at all events. Always with a smile on their face, and the first to congratulate their competitors, this young lady has already broken the US Open Trick Record – a record 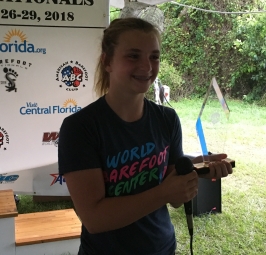 standing since the early 90’s – and become the 3rd women in the history of the sport to trick over 5000 points. You can find her at every tournament, either helping on the dock, working on her scoring, or encouraging her fellow junior skiers before they take their runs. As soon as she is done with her runs, whether good or bad, you will always hear her thanking her boat crew, and always doing it with a smile on her face. There is no junior out there that better embodies the spirit of sportsmanship, and willingness to share her positive experiences with her peers. She is a great role model for future award winners to come. This year she will be representing the US at the World Championships on both the Junior, and Open team, defending her World Championship titles in Slalom, Tricks, Jump and Overall from 2016, and we know Lexi McCauley will do us proud.

When reading the description of barefooter of the year, it says the candidate is someone who is a TRUE ambassador of barefoot water-skiing, someone who has gone above and beyond to serve our sport in the past year. With that in mind, there is no one more qualified than the one and only Shank Diggity, Shank the Crank, Mr. Shank, the notorious Mark Shank!

Mark came into the competitive barefoot scene a little later than most, he grew up show 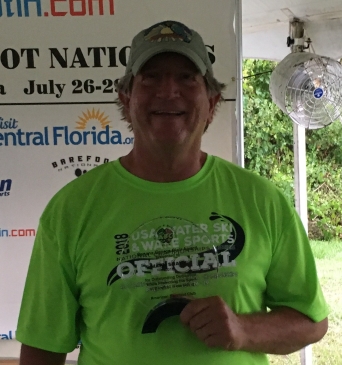 skiing but decided to start competing barefoot just a few years ago in the south-central region. Now, at the young age of 64, he continues to train and has even partially retired from his job as a lawyer in Dallas in order to spend more time on the water at his ranch on the Pedernales River in Spicewood, TX. However, skiing is only a fraction of the passion he commits to the sport. As soon as he started going to tournaments, Mark began absorbing everything he could possibly learn about the sport. With his lawyer smarts, good-hearted demeanor and excitement for the sport, it did not take Mark long to raise through the ranks at the local, regional, national and world level.

Locally, he is an advocate for all things barefooting! He has hosted multiple events, opening up his home and property to any and all barefooters in the area for tournaments, Campouts, or just fun days on the lake. He drives in from Dallas to make it to Austin Barefoot Ski Club events and is always willing to lend a hand.

In the south-central region, he was the assistant executive director this past year and has now moved up to take on the executive director position. In addition, he volunteered to store all the regional tournament equipment and trailer on his property and in his barn. Mark also brings his boat to local and regional tournaments. He even upgraded his boat’s engine last year so that it could pull top competitors with a full tournament load of officials on board.

Nationally, he is a devoted member of the American barefoot club and has worked rigorously to achieve his driver, judge, scorer, and homologator official ratings so he can help officiate at all levels. Dedicating his time and resources to not just learning every aspect of the sport, but asking questions and striving to improve on how things are done.

This leads into his involvement at the world level and one of his greatest achievements of being on the Rules committee of the World Barefoot council. Mark has made it his mission to clean up the rulebook so that it is clear, concise and fair to the skier. He has gone through and edited our sports entire rulebook and continues to advocate rule changes giving benefit of the doubt to the skier.

Mark’s passion and desire to better the sport is undeniable which most of you already know because he is the first person to pick up the phone and call you to talk about barefooting!

Doug Jordan is one of those guys at tournaments covering things that just need done.   He is proactive and if he thinks he can help make a tournament better he just jumps in and does the work.  Some things he does are very visible and some are virtually unseen but make a difference.

Last nationals he built a bar, at last Worlds he built flag stands, some of the small things he does make people wonder how did that get done or take a second look and think that was new this year, cool.  Many have seen him dive in to re-set a loose jump at tournaments and what most people see and notice him doing is only a small part of what he has done over the years.  He has taken on one of the biggest challenges in our sport when he hosted the 2006 World tournament, and it was awesome!  While that was a coordinated effort by many he did so much to put on one of the best World Tournaments I have ever attended.   Doug is also an awesome footer who always puts on a good show on the water with big jumps, flips, and some other wild things like high-flying toe up starts.

I know it is his passion for the sport that drives him to do so much at tournaments and for others.  I think I have been to 20 Nationals and 4 world tournaments as a competitor and I think he has been at most if not all working and helping out before, during, and after tournaments.  I think many skiers don’t realize how many small things it takes to make a great tournament.  Over the years if you look at all of those small things, the medium things, and big things together you quickly see the huge contribution this guy has made over the years.

I would like to thank Doug for all he has done over the Years.

CONGRATS TO ALL OF THE WINNERS!