It all started when three old friends met for breakfast.  Don Mixon, Al Kiefer and Don Mixon Jr. decided it was time to get the band back together.

It’s time, they said, to honor the people who laid the foundation for modern barefoot water skiing.  The pioneers in jean shorts instead of wet suits who figured out to successfully ski without skis… without the benefit of a boom… or a clue.

And on Saturday, October 20th, dozens of legendary barefooters, officials, supporters and fans gathered at Al Kiefer’s House on Lake Jovita at site of the 1982 U.S. Barefoot Nationals in St. Leo, Florida, to celebrate and remember.

“These people were such an integral part of my life… like family.  I wanted to see them all again.  I had a heart attack about a year ago… and it made me realize I needed to get this done,” says Al Kiefer who is a long-time barefoot competitor, coach and tournament organizer.

“This might be the last time we all get together like this… I wanted to make it special,” says Al.

About 60 people gathered at Al’s house to watch old videos, laugh at old photos, marvel at memorabilia and of course, wear some awesome neon pink shirts.

Chris Harris stopped barefooting competitively in 1986, but still made it a priority to travel from New York to attend the event.  Joe Knapp has competed in every single one of the 41 U.S. Barefoot Nationals and he wasn’t going to miss this.  Art Cozier didn’t have to work on Don Mixon’s Correct Craft parked in the backyard… but Mr. Correct Craft was ready, if called to action! 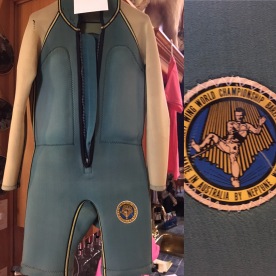 Jim Boyette, almost 91, brought his first wet suit and a boatload of memories.  Lori Powell Drell didn’t wear her signature braids, but other than that… she hasn’t changed at all!  Lane Bowers brought his whole family, a huge smile and so many great stories!

“We have been talking about this for almost two years and I wish we would have done this sooner it was an awesome evening with great friends,” says Don Mixon Jr., a wake slalom specialist who was on multiple U.S. Barefoot Teams.

Don Jr, Don and Al are some of the biggest fans of barefoot waterskiing you will ever meet.  They still take an active role in attending and supporting Southern Regional Tournaments and the U.S. Barefoot Nationals.

Many of the 1980’s crew will be back together again in April when Don Mixon, John Cornish and Lane Bowers will be inducted into the USA Water Ski Hall Fame!  Buy your tickets here.

And it’s not too late.. you can still buy these limited edition DVDs and shirts, We have youth, small, medium, large and XXL sizes left (for some reason the XL’s went fast) contact: Betsybarefoots@aol.com