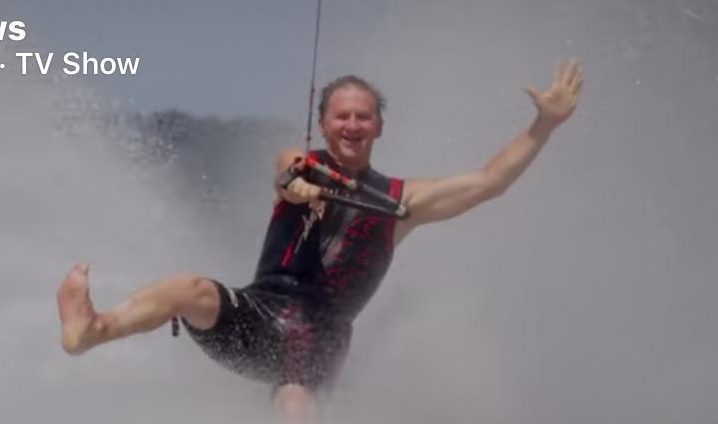 The most impressive New Record was not set by a single skier but by all skiers.  The 2019 Eastern Regionals 2019 Started at 8:00 AM and was finished by 1:30 PM, finishing the tournament in 5 & ½ hrs. That record was set while having extended turnaround times and taking time to film special runs for our Channel 6 news coverage!!

While extra wait times and skiing for news coverage are not items that contribute to a record finish time, we were able to accomplish this by running the first time Eastern Regionals dual river site event. It was awesome!!!  The traditional Port Indian tournament site was expanded this year so we could run the tournament in two different directions at the same time with the two start docks only being a few hundred feet apart.  Score sheets poured in fast to our central scoring area and our Chief scorer Tina McCauley and Assistant Chief Scorer Sue Andrews were on the start dock ripping through sheets as fast as they came in. Tina was keeping up with live results on the Lion Program throughout the Tournament.  Check out all the RESULTS HERE.

Temperatures rose quickly past the 80’s and into the high 90’s.  Everyone was on the start docks or wading in the water by the start docks.  Boat shuttles move people and score sheets to the locations needed.  Running a two lake/river site we were able to get everyone out of the heat and eating Lunch by 1:30 pm (including the officials).  Lunch was followed by a nice big break before starting a ski show at 7:00 pm.  The ski show was followed ……. Oh wait….. we got a text at 5:50 pm saying we were going to be on the channel 6 news. Yes, the same day it was filmed. 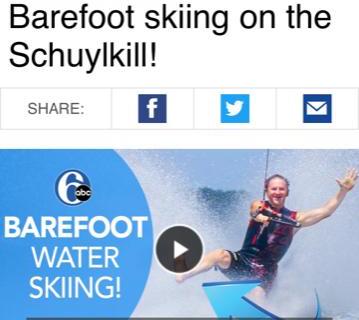 Many people who got the news came to the Banquet hall early to watch the 6 ABC news video and that was followed by the ski show then the riverside banquet at 7:30.

It was really cool to see second year footer Taylor Konefal tie long time footer Peter Bostock (both locals) in tricks with totally different runs!!  We learned from the News clip that our oldest competitor was Fred Steinbaum at age 77.  Mike Sousa qualified for worlds, Jess Caserta continued his streak of being at every Eastern Regionals ever held and returned to ski this year after sitting on the sidelines with an injury last year.  While most of the footers were returning footers, we had one new footer, Brian Birsa, who entered the competition and earn a Barefoot badge!!

We had a couple of footers that competed last year but that had to just spectate this year due to injuries ( one from a footing injury and two from non-sport related injuries).  We had awesome club support from Port Indian as we ran boat shuttles during the tournament and Creig Gilen organized the many shuttle boats.  Rick Andrews, Matt Morris, Peter Bostck, Katja Bostock, Annie Walker and several of the Atomic footers were also a huge help in launching docks, helping set up and tear down.

A special thanks goes to Tina McCauley who was our Chief Scorer and made the trip and worked even though she could not ski.

The biggest thanks has to go to my wife Vicki Kaufman. She did so much prep work, purchasing supplies, prepping chicken, organizing an awesome lunch (Corn, chicken, sides), She kept calm when Arlene Stoppe had to move registrar responsibilities as a family emergency came up at the last minute and quickly allocated other to help.  She also kept the tournament director in line and made sure he stayed on top of everything.

Another huge recognition is due to our own professional chef and footer Jim Gowder.  He cooked all of the chicken for lunch,  helped arrange the banquet facility, donated his dock for the sea plane rides and for boat shuttling.

The tournament was not without it’s concerns and challenges as the days leading up to the tournament were quite busy and rather challenging.  The barefoot jump was in New Hampshire just over a week from the tournament and the only participants coming from there were flying down in the sea plane.

Julie and John McCauley made the long round trip to bring the jump to Port Indian.  They dropped it off just a week and two days before the tournament and as they dropped the jump off it started to rain.

Little did they know what that evening and night had in store for the area.   That night I got a call at 10:30 pm at night saying the river is going to flood we need help.  The town just north of us just got 6 inches of rain in 10 min from a microburst.  This pic looks like something out of a movie but it really happened and it really sent a ton of water our way.

We of course did not realize this microburst happened until after the flood water came.  My notice was from a call at 11 PM saying that help was needed to prepare for the flood.  The focus quickly shifted from preparing for Regionals to helping river friends prepare for a flood.  Few people were available on short notice and just a few of us worked feverishly to raise as much stuff as we could, tie off the barefoot jump and other items that could float away, and pull boats to higher ground working through to 2:30 AM.  The water was pouring into the building so fast you could see the current the water was making while it started filling the building.

The river doubled in height and came four feet into our base property that we use for tournaments. Flood prep is only part of the work and flood clean-up is always a lot more work than the prep.  Kiwi Ben Groen was coming in to do a clinic and people were looking to me for answers asking if we will even be able to ski.  I was calm and said we would be fine as long as we did not get more rain but that was not the case…. It poured again Tuesday night and by Wed morning before the tournament.  This rain on top of the wet spring and microburst sent trees larger that our ski boats floating down the river and the river flow started ripping more than 10,000 cubic feet per second which is really fast on our small river.  This second storm was just days before the tournament.  I looked at weather and predictions a though we would still be ok.

We were able to ski the clinic and the tournament, but before the tournament started, we needed help to make up some work time and complete the build of our second start dock.    Some of our clinic skiers pitched in using DeWalt tools (We need them as a Sponsor).  Even the girls chipped in late at night to get the second start dock prepped and ready to go. 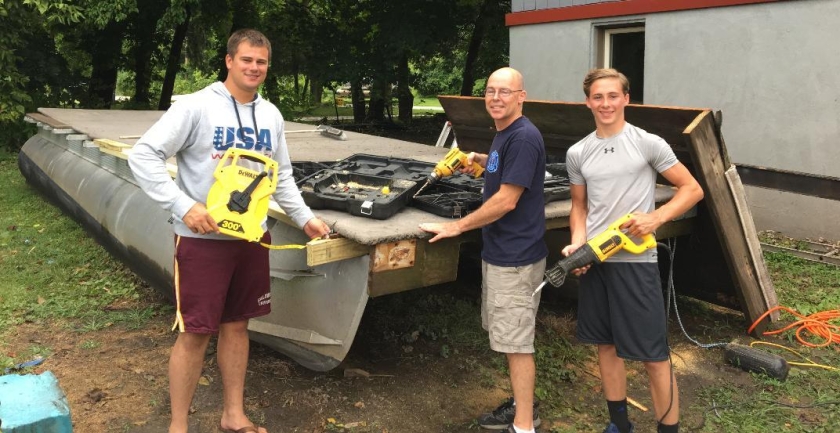 Friday came and it was time to launch docks.  The river settled just enough to set docks up so we would be able to start Sat morning without delays.  A lot of people chipped in to make it all happen.

We had to postpone jump that was scheduled for Friday and we had to wait to go see if we could do it Saturday.  The river never settled enough to safely put the jump and run the jump event so we did end up canceling the Friday night jump.

We also ran the tournament with some of our Chief officials being on injured reserve, officiating but not skiing.  We also lost three great officials at the last-minute bit that did not slow us down as some of the world class officials stepped up to make sure everything was covered, and the tournament ran seamlessly.

Additional events and fundraising, Don Stoppe bright the sea plane was back this year and took many people for rides right above the sight,  landing and taking off from just up from the water we were skiing on.  Sam Dubs from the Atomic Footer’s did a great job of organizing donations for raffle baskets including Lane Bowers DVDs, Home Depot, Chick-Fil-a, a few different beer vendors,  WBC ski days, and much more.

The banquet was held at the Commercial Club which is an awesome club that is also riverside.

The banquet was held at the Commercial Club which is an awesome club that is also riverside.

We missed a few of our female Footer’s this year, but the streak of all the women making back deeps continued this year.  Next year I expect that streak to break as we have some female Footer’s who will be competing for the first time.  We may need a formal Port Indian / Atomic female footer challenge next year.
Thanks to all of our officials and volunteers in addition to those listed above:  Super Dave Miller – Chief Driver, Ben Groen – Chief Judge, Tina McCauley – Chief Scorer, Rich Kaufman Chief Safety, Mark McCauley, Jimmy and Lorraine Piskura, Phil and Ryan Kramer, Sue Andrews, Lenore Sousa and many others such as the parents of Matt Morris.