Every year at the U.S. Barefoot Nationals several awards are given out to the best of our sport.  Here are the 2019 Winners:

Candidates must be junior barefoot skiers who display a spirit of helpfulness, a positive attitude, enthusiasm, the ability to get along well with other skiers and officials, good sportsmanship, and a willingness to share positive experiences with peers. Candidates do not necessarily have to be champion skiers. This award is in honor of Jennifer Odom, a former junior girls National Barefoot Competitor, who died tragically in 1993.

The 2019 Winner of the Jennifer Renee Odom Spirit Award is: Brett Swanbom

When this young man first joined the competitive barefoot world, he was a shy and timid young boy nervous to shake your hand, but in the last three years he has exploded into a confident young man and an extremely strong skier. On the water, he has doubled his slalom score, more than tripled his trick score, and now soars through the air jumping inverted. But his transformation on the water is not the only thing that has made an impression. Off the water, that same timid boy, now looks you in the eye to shake your hand, immediately jumps out of his seat when you ask him to lend a hand, and goes out of his way to talk with you about your skiing. At the recent South-Central Regionals, he did not go unnoticed by his senior competitors. It was reported that this young man was seen giving helpful tips and really good advice to other skiers in a caring and respectful manner. He is always the first one to volunteer to ski and encourages fun on and off the water. That much compassion, dedication, and positivity in a 13-year-old is what barefoot water-skiing needs and we cannot wait to see what he will achieve next!

Banana George “Blairfooter” of the Year

The award recipient represents a true ambassador to our sport – someone who has distinguished himself/herself above and beyond all others in serving the sport.

The 2019 Blairfooter of the Year Award winner: Mikey Caruso 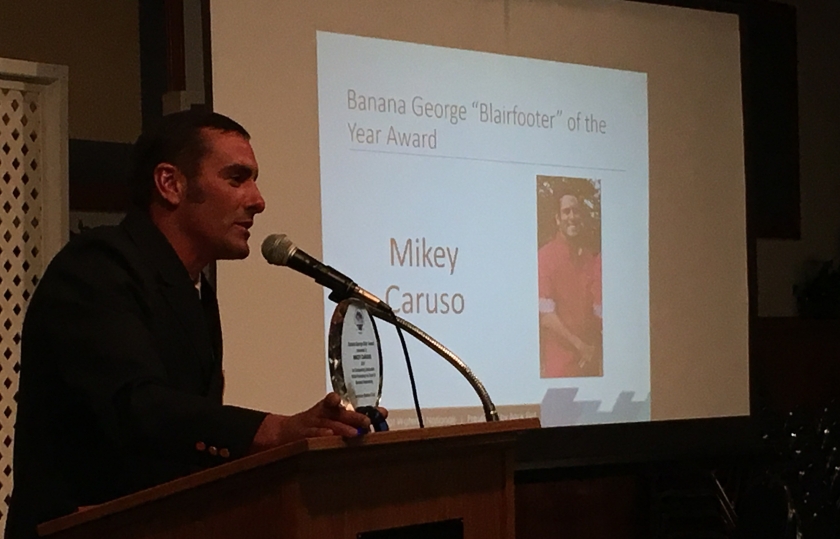 A Former Junior World Champion, he fell into drugs and alcohol and disappeared for five years… homeless and an addict.  Now, he’s five years sober, back in shape, and back competing at the Open Pro level… even earning a spot on the 2018 US World Barefoot Team in Canada.

But beyond what he has done on the water, he is giving back to the sport he dedicated his young life to.

If you watch his interview talking about his dark days away from the sport, one of his biggest realizations is the importance of family and friends and nurturing those relationships. As a fellow member the barefooting family, I’ve noticed that he reaches out to myself and other competitors to not only ask how we skied, but also how life is going. His passion for the sport and the people involved overflows at barefooting events where he can be seen encouraging skiers, asking officials if they need help, and promoting barefooting on social media. He built a great reputation as a junior skier, but I think we have only seen the beginning of the love and enthusiasm he has to share for the sport! Not to mention his incredible achievements since his return. The fact the Mikey has in a short time gone from being down and out in life, totally disconnected from the sport, to working his way onto the US Elite Barefooting team and becoming the Southern Region Director is inspirational to all who know him. We’re big fans!

This award is given annually to recognize the person(s) who has contributed to the sport of barefooting for at least ten years. The award recipient is someone who has distinguished himself/herself above and beyond all other individuals in serving the sport. 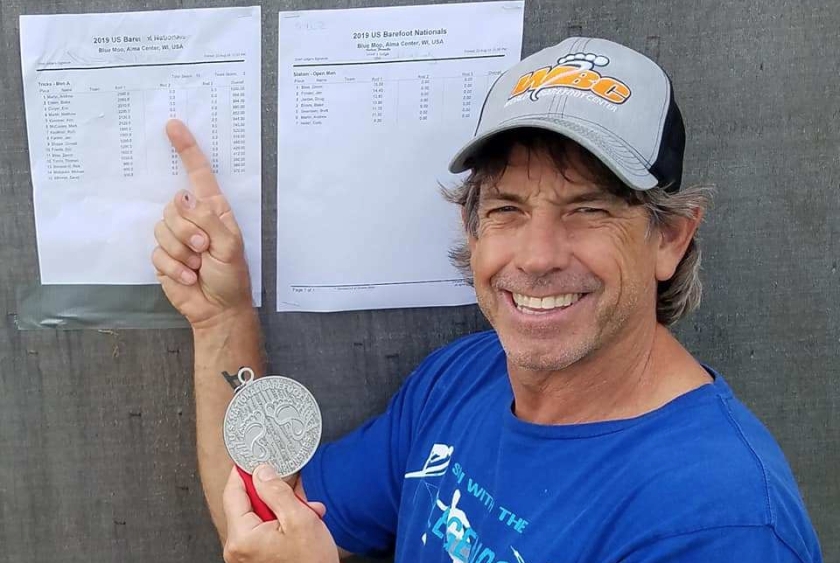 This man has been attending Barefoot Water-skiing tournaments since 1992. He has competed in 107 tournaments since then and either judged, scored, driven, or helped out in some capacity at every single one. He managed the US team at the World Championships in 2001 and has frequently been a member of Team Select, including this year for the upcoming 2020 World Championships.  He has been the president of the Austin Barefoot Ski Club many times over, and the director of the South-Central Region for several terms. He has been instrumental in hosting Nationals three times and has hosted regional and local tournaments as well as fun events too numerous to count. He has brought his personal boat to nearly every tournament taking place in the South-Central Region for the last decade and has taught hundreds of college students how to Barefoot while hosting Aggie Barefoot Day for the last 6 years. He continues to train 4 times a week himself and is still breaking PBs and qualifying for World Championships at the ripe age of 56, while also striving to grow the sport by putting endless time and money into supporting up and coming skiers.

It has been a long time since we’ve seen this guy on the dock at a world championship! The Silverado Cowboy is training for the 2022 Barefoot Masters in Texas… are you? Get ready for the first barefoot worlds since 2018! Check out the website and Facebook page! #barefootmasters #barefootnation @iwwfed @usawas @worldbarefootcenter
Loading Comments...
%d bloggers like this: