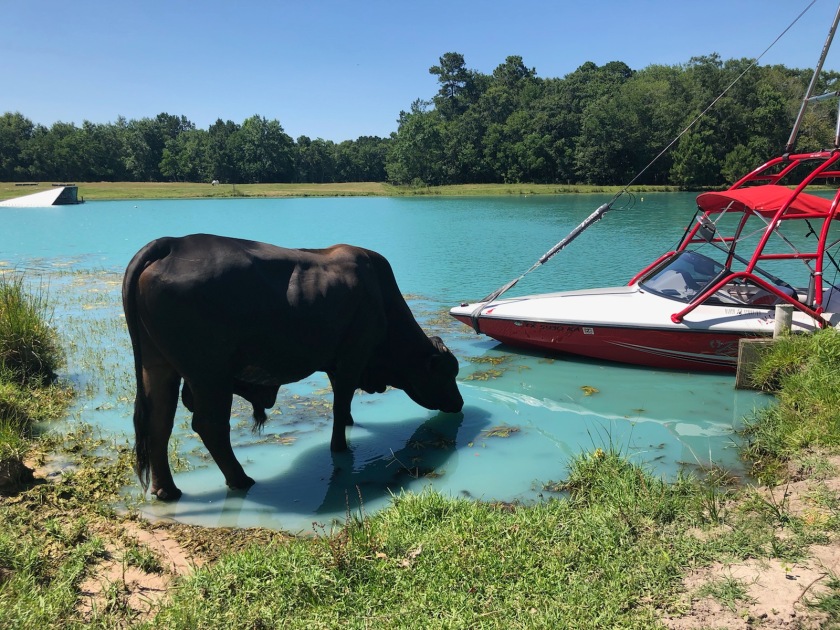 The 2020 Barefoot Blowout at the Stevenson Ski Ranch in Conroe, Texas put on by the Austin Barefoot Ski Club kicked off the summer ski season in the South Central Region.

It was the first tournament Landen and I have attended after an 18 month trip around the globe. It felt like we were officially home, getting together with our barefooting family and skiing on arguably one of the best ski lakes in the country. What makes skiing on the best lake even better? Having the best coach in the world and a dear friend in the driver’s seat telling you what to work on! We were blessed to have Ashleigh Stebbeings hold a clinic for all the participants on Friday.

It is also an Austin Barefoot Ski Club and SCR tradition to hold a junior development clinic the day before tournaments and boy were these four boys lucky! Ash helped two boys, Conlin and Ashton, improve their skills and taught two more, Logan and Carson, to stand up on their feet for the first time.

As new barefooters we had to instill in them the spirit of competition, so we even held a little boom division tournament for the boys to go head to head against each other and be awarded medals at the end!

As the site of the 2021 Barefoot National Championships, we are slowly working towards preparing the site for tournaments to come. The pristine conditions would draw any footer into the lake’s blue waters, however, I realized this weekend that the Stevenson Ski Ranch truly is special not only to myself but for other skiers too. For me, it is the place where I met Landen and spent the majority of my time skiing in college. But I also saw magic happen for some of my fellow barefooters as well.

Two years ago at the 2018 Barefoot Blowout, on the same lake, our beloved native Texan, Austin Barefoot Ski Club member, and World Barefoot Center sponsored skier made his first-ever surface turn on his feet. Fast forward to this past weekend at the 2020 Barefoot Blowout and the same scrawny kid (about 2 feet taller now), blew us all away. 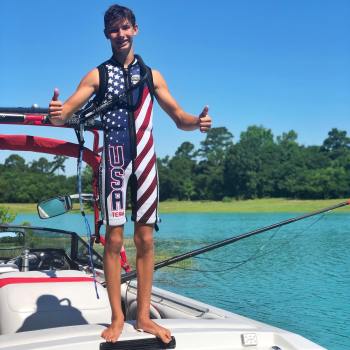 Brett Swanbom at 14 years old took every ounce of confidence and each lesson he has learned while training, onto the water to give a beautifully clean performance of an unbelievable 8,000 trick point run. I was smiling from ear to ear as I easily judged his smooth turns and watched him celebrate with double fist pumps! I was amazed at how far he had come in such a short amount of time and as a state, we are proud to claim him as the best barefoot tricker to ever come out of Texas!

Unfortunately, the disbelief was real when I later found out he did 7 multiple turns instead of the allowed 6 and I had to downgrade his score to a 7,500… However, that does not change his amazing performance and I’m sure will only fuel him to continue improving his scores. The magic didn’t stop there though, we also had an incredible performance by another Austin Barefoot Ski Club member.

As a newcomer in the sport, VonL Adrian Adams has been training to find his niche in the competitive world of barefoot waterskiing. With a background in motocross, he watched inverted jumping for the first time and instantly knew that was his calling – flying high trying to chase the adrenaline rush. That was three  years ago… And now this weekend, on the shores of the Stevenson Ski Ranch in Conroe, TX we all held our breath as VonL approached the jump ramp at 40 mph on the way to attempt his first ever inverted jump long line. The result was nothing any of us would have ever imagined, not even the jumper himself.

VonL got ahold of that ramp and BOOSTED himself through the air, arms stretched out until he realized he was flying over the 20-meter buoys and couldn’t believe his eyes or his circumstances. He instantly screamed, pulled in, and came crashing down at a whopping 22.8-meter fall… The crowd went WILD!!!

The jump was huge and unforgettable, the shoreline was buzzing with excitement and anticipation for what was going to happen next. Could he pull it together to land one? Was it just beginners luck? Could he fly even further? All the questions were answered in quick succession as VonL ran through all the possible scenarios of how NOT to invert jump in rounds 1 & 2 of the jump event… He twisted sideways and crashed, he let go in the air and crashed, he came down too early and crashed, he came down too late and crashed, he tripped the ramp only going 11.1 meters and crashed. It was a bit painful to watch, but nothing will ever tarnish the spectacular moment we all witnessed of his first taste of flight! We look forward to watching him dial it in to soar again and you should too!

I don’t think I stopped smiling all weekend. There was excitement constantly cruising down the lake. 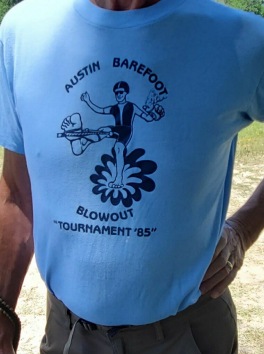 We had Ali Gates fly in from the SNOW in Colorado to soak in that warm private lake water and ski her butt off as the sole competitor in Women’s B. There were back to fronts for days as Jimmy Tauras and Austin Kolodejcak. spun on their bare feet competing for gold and silver in the Men’s B trick division. Jim Rollins came out of the woodwork, not skiing for over a year, and had the handle at both ends with quite impressive scores I must say. I, myself, was impressed with my own slalom performance doing back one foot crosses all the way down the lake. In practice, I couldn’t believe my eyes when I saw, for the first time, Mark Shank do a back to front on his shoe skis.

It may have been a small tournament, with just a handful of skiers, but we packed it full of fun and laughter on and off the water. We drank beer, ate BBQ, and pet cows. I’m not sure what else you could ask for at a good Ole Texas tournament, but we hope to see y’all there next time!

I want to give a HUGE thank you to the Stevenson’s for allowing us to share in their little slice of heaven. And thank you to all the skiers and volunteers who came out to support our club and the sport. We couldn’t have put on a successful tournament without each one of you and we can’t wait to do it again next year!