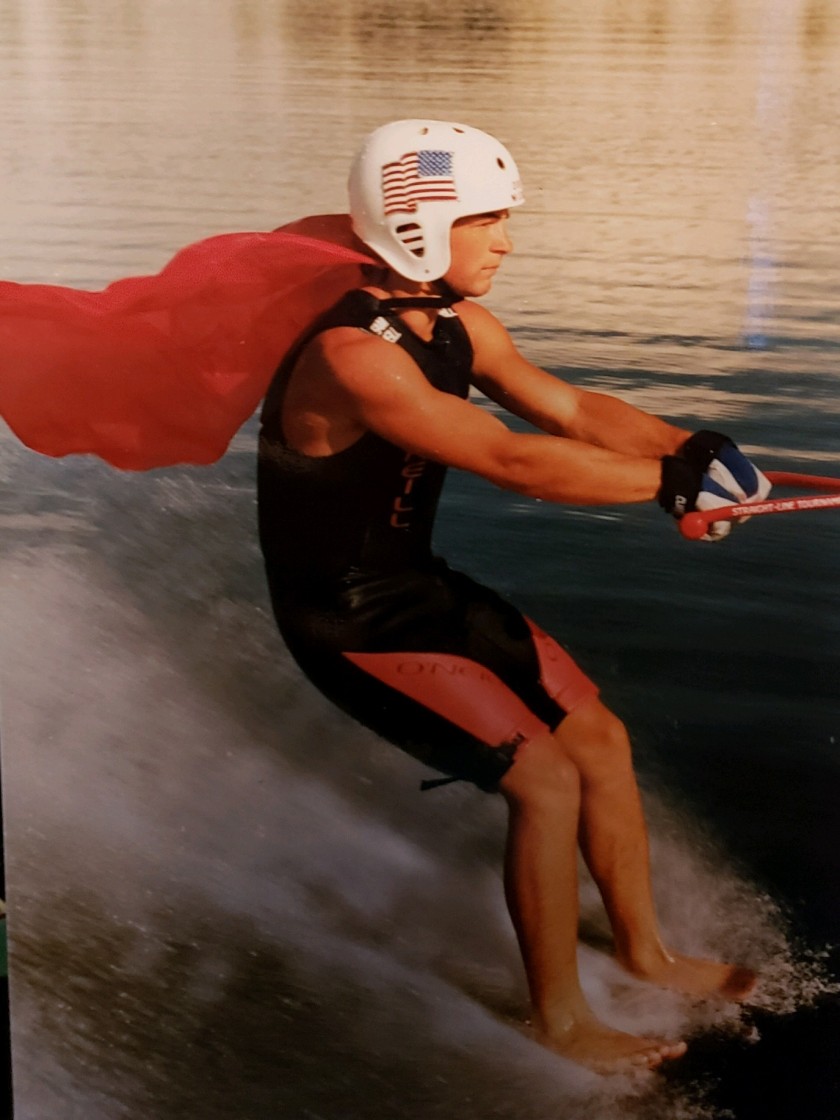 Don Mixon, Jr is a legend in Barefoot water skiing… And finally is getting the recognition he deserves in the USA Water Ski & Wake Sports Hall of Fame!

Don Mixon Jr. won the 1981 Junior Boys national barefoot slalom and overall titles and his scores were high enough to put him into the Open Men Division at the tender age of 13.

As an individual competitor, he captured the silver medal in slalom at the 1985 and 1994 Barefoot Worlds. A slalom specialist, he set the world slalom record four times.

He also was the first barefooter to do a front-to-back positional turn before his back slalom pass and the first barefooter to do a wake 360 turn (unwrapped) in a tournament. He won the Open Men national slalom title in 1985 and 1994, and the Open Men national jumping title in 1996. And just remember, he was competing in the age of Scarpa and Seipel!

To honor a very special barefooter… the Southern Region decided to hold a one-day only limited entry barefoot tournament: The Don Mixon Jr Hall of Fame Tourney the same day as the hall of fame induction ceremony!

Many of the old-time barefooters came out to watch the tournament and swap stories with Don Jr. including Chris Harris, Willie Farrell, Scott Gray, Al Kiefer, Don Sr. Doug Jordan and many more!

The Tournament was limited to the first 20 competitors, and indeed, 20 competitors showed up to trick, slalom and jump on the record-breaking waters of Lake Grew!

For all the scores go HERE.

Local Young Gun Lache Collette won the Boys A Division with a 2.33 in slalom and 350 in tricks, all while running camera and helping with the tourney.

Tony Craugh made it happen in the Mens A Division winning slalom and his first ever jump event. Trey “Minschew” Edwards won Tricks with a PB of 1950!

In Mens B, Don Stoppe won Slalom with a 8.1 and John Garrity won tricks with a 790. John also was the tournament’s water and ice guy! Thanks John!

In Mens C, 2020 ABC Barefoot Community Champion Award winner and Perennial Barefoot Enduro King Lance Smith killed it in his first ever three-event barefoot Tournament scoring 1030 in tricks and 6.05 in slalom! He also killed on the Jet ski as the pick up boat driver.

In Masters Men, Matt Ellis won slalom and tricks with Peter Bostock right on his heels.

In the Masters Women Division, the small but mighty Carol Jackson, set a pending Womens 6 Record of 1100 points in tricks! Congrats Carol!!!!

Don Simon won Super Veterans Mens slalom and tricks and entertained everyone with stories from the 1900’s.

Willie and his buddy Chris Harris also pitched in to help organize the Southern Region t-shirt box, folding shirts like Lake Grew was The Gap.

Chief Judge and Womens International competitor Ashleigh Stebbeings tied her own world record in slalom with a 17.2 and tricked a solid 5200 in tricks. All this, while keeping the tournament running like a well-oiled machine.

Tournament Director, Chief Driver and Chief Homologator Ben Groen went out there and did it all! Scoring 9080 in tricks, and 23.2 meters in jump!

Massive thanks to Chief Safety Char Portman and everyone who pitched in to make it a great day for Don Mixon Jr. and to Chief Scorer Alyx Matheny who keeps everyone together and the tourney running smoothly.

Driver and motivational speaker Doug Jordan also made an appearance in the boat! Thanks DougJordan!

This was the last tourney for Bruce Walter’s Bumblebee Sanger… thanks Bruce for all of the support over the years!