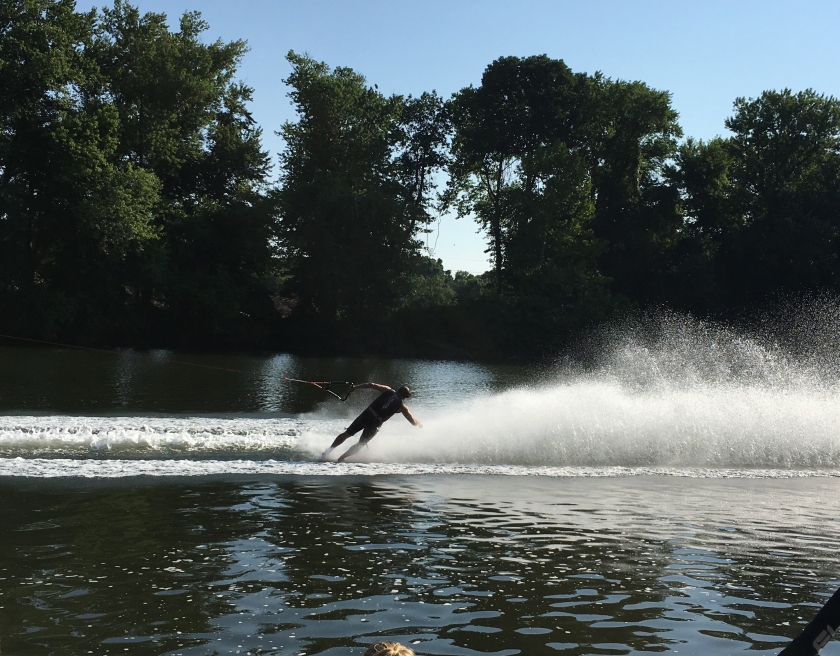 The Eastern Region is blowing up… all thanks to the power of the Atomic Footers and the Port Indian Ski Club!

You’ve heard of things going viral… in the East, things started to go NUCLEAR about this time last year.  That’s when Eastern Regional Director Rich Kaufman saw a Facebook post of a barefooter named Michelle Comp receiving her ABC Barefoot Badge   from Ben Groen.  Michelle is a member of the mighty Atomic Footers who ski in the shadow of the Three Mile Island Nuclear Power Plant.

Rich reached out to the Atomic Footers and this year, the Eastern Regional Tournament virtually melted down in two-day barefoot waterskiing extravaganza!

“The barefoot badge brought us all together and that will make our region bigger and stronger.  The Atomic Footers came out in force and we love them,” says Rich, who is all about growing our sport.

The 2018 Eastern Regional Tournament started Friday evening with a beautiful sunset jump competition in a cove of the Schuykill River near Philadelphia, Pennsylvania.

Mark McCauley trailered his Sanger and his Mom, Julie McCauley, trailered his jump all the way from Louisville, Ohio to help his adopted Eastern Region make the tournament happen.  It was worth it.

Mark qualified to compete in Jump in the 2018 Barefoot World Championships. He was already qualified in Tricks. New Zealand’s Ben Groen, Team USA’s phenom Lexi McCauley and the Eastern Legend Don Stoppe also put on a jump show for the local crowd gathered in boat flotilla on the opposite shore!  Dave Baranowski also led the locals in an Eagles chant as one competitor jumped in her Minnesota Vikings Helmet.  After jumping, local wakeboarder Jeff Johnson hosted a party for everyone at his Tiki Bar Backyard on the river.

The competition kicked off Saturday back in the Schuykill Ski Cove.  Local boats shuttled competitors and fans from the Commercial Club to the cove and the tournament and the river had a festive, boat-parade-type atmosphere all day!

The starting dock was fairly radioactive as the Atomic Footers helped fill the Mens C Division… seven men in all were locked in close competition all day.  Eric Rankin won Tricks and John Garrity won Wake Slalom and the Overall Mens C Champion.  But all of the men in the division were within 150 points in tricks and 2 points in slalom… it could have been anyone’s tournament!

Some brand new tournament footers tested the waters in the Grassroots Division including Rick Andrews and Kevin Garrity who also earned his barefoot badge!

Another closely battled division was Womens B with Emma Sylvester winning Wake Slalom and Tina McCauley winning Tricks and the Overall Womens B title… closely followed by Port Indian Ski Club favorite and barefooting newcomer Taylor Konefal.  Taylor just learned her back deeps and they are money!

The Super Vet Men Dynamic Duo of Ted Eisenstat and Fred Steinbaum showed us what being over 75 is all about!  It was Fred’s day to win the division after he spit out his gum halfway through tricks.

2018 US Junior Barefoot Development Team Member Mike Sousa won the Boys A Division showed us all that a kid in blue Atomic Pucker lip sunscreen (Made by, who else, the Atomic Footers) can do a back froggie start with no problem! Go MS3!

Eastern Region Favorite Son Johnathan Martines won the Open Pro Mens Division with some incredible skiing. It was great to see Johnathan, his Dad John (Barefoot.org Webmaster) and Granddad John all on the river!

Lexi McCauley won Open Womens and Ben Groen won International Mens and then put a ski show on for the crowd!  After skiing was over for the day, everyone gathered at the commercial club to take a ride in Don Stoppe’s cool sea plane and then watch Lexi and Ben tear it up!  Jumping and synchronized surface turns made the crowd go wild… all with a live band playing some surfing music!  Then the awards banquet was followed by more music and fun by the river!

We can’t wait for the NEXT year’s Eastern Region Tournament to explode again!

The next tournament is the Footin.com 2018 U.S. Barefoot Nationals  presented by Visit Central Florida on July 26-29 in Polk City, Florida… sign up here TODAY!(link)